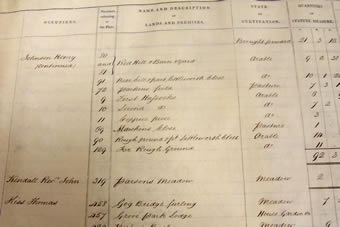 Tithe apportionments were produced after the Tithe Commutation Act of 1836, which commuted all tithe payments to a monetary rent charge. The schedules cover the titheable land of the parish. The occupier paid a proportion of the yearly income generated by the land to the landowner.

Before the reformation, payments were usually made to the parish church. The sale of church land meant that it ceased to be a purely ecclesiastical payment. By the 19th century, the calculation of tithe payments had become controversial. The enclosure of farmland, under which tithes were replaced by rent charges, meant that the payment was becoming irrelevant.

From 1836 tithe apportionment schedules of all titheable land were produced. These listed owners, occupiers, their land, its size, and the new rent charge it attracted. The schedules were accompanied by a map, which shows individual plots of land with a plot number.

The schedules are not arranged systematically so it often requires much time-consuming research to discover the details of a particular plot or person. This database allows you to search by name, parish, and property name. You can also view entries in plot number order within the parish, or alphabetical order by the name of the owners or occupiers.