What information is contained in the database?

The plot number can be used to identify the land on the accompanying tithe map, which is a map of the titheable lands covered by the apportionment. The tithe apportionments also included the rent charge for the land, but this information has not been added to the database.

The maps that go with the apportionments are not available online, though they have been digitised and are now available for purchase in a number of formats. Details of what we have for sale and how to purchase them. 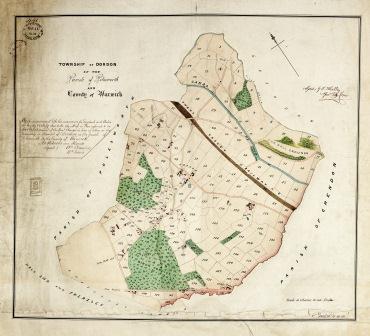 Coverage of the database

This database was created by our volunteers and was completed in 2008. If a parish does not appear in the database, it means an apportionment was not created. Apportionments were only created in parishes where tithes were payable. Some parts of the county are better covered than others. Areas which were enclosed before 1836 are often not covered because tithes were no longer payable. Our tithe coverage map indicates whether a tithe apportionment exists for a particular parish.

The measurements given in the tithe apportionments acres, roods and perches (imperial units), and the size of these could vary according to locality.

A rough guide to the size of the units is as follows: